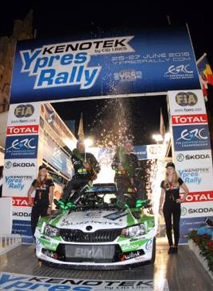 We are proud to announce that this year we were the official name sponsor of the KENOTEK Ypres Rally.

This breathtaking motorsport event, which is part of the European Rally Championship, was hosted for the 51st time in Ypres. Between 25th and 27th June all the main rally drivers were competing on our asphalt roads in the Flemish province of West Flanders.

For CID LINES, as an international company, it was an honour to support such a well-known event which took place in Ypres, our home town.